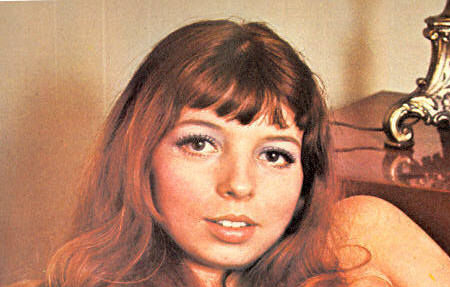 Rene Bond was born October 11th, 1950. Today would have been her 69th birthday. Of course, Rene didn't actually make it to 69. She died entirely too young at the age of 45. I'm certain she had no idea when she passed away that she was on the verge of a renaissance as a cult figure. I suspect Rene Bond is even more popular now than she was at her height as a model and performer.

Hey, can you guys do me a favor? Rene's cause of death was for years listed as "liver problems" and this has gradually evolved into "cirrhosis due to alcoholism" without a shred of new evidence to support the claim. It appears to be based solely on conjecture. It also appears to be wrong.

One day on the Rene Bond - Tribute Facebook page, an old friend of Rene named Joan showed up and provided the following information:

Rene was one of the first women to get silicone implants when they first started the breast enhancements. It was later discovered that hers had been leaking for years, destroyed her immune system.

Rene was lucky in the sense she did not fall on hard times financially. She met and married a fairly well-to-do younger man (Hubby #3). They had two sons via surrogacy, they traveled extensively, lived in a beautiful home in a nicer area of the SFV.

When Robin Bougie of Cinema Sewer inquired as to whether Joan believed the implants were the direct cause of Rene's death (and we have since learned Rene had the procedure done twice), Joan was unequivocal:

Yes, I do. She was ona camping trip with her family, came down with a sore throat on a Thursday and died the following Sunday. She had been constantly ill for several years, had to miss my daughter's wedding (her goddaughter) which broke her heart.

I agree, she never needed the implants, she had a terrific body.

You can find these quotes with links back to the posts with the original comments in this piece. And if you have any doubts about Joan's authenticity, she had shared personal photos with Rene (including one of Rene at age 15!) prior to posting on the page, and the fact that she and Rene were classmates can be verified by a vintage high school yearbook which can be found online.

I don't know if Rene suffered from alcoholism, but neither do any of the people who list it as her cause of death. It sure sounds like that part of the equation is wrong. At worst, it might have been a contributing factor. But I have also been told Rene may have had a preexisting condition dating back to at least the mid-1970s which required medication. So it's entirely possible it was a combination of causes, with silicone leakage being the primary culprit.

The favor I'm asking is for us to finally set the record straight on how and why Rene died. Your author had a sister who died from alcoholism, so I take this matter seriously. However, I think we do a great disservice to Rene Bond if we paint a picture of her final years as sad when it seems that the exact opposite is true. It doesn't diminish the tragedy of her untimely death to acknowledge she had a reasonably good life until it was abruptly over. And if you need proof, I think this post and the links I've supplied are at least a start.

From a personal standpoint, I never met Rene Bond, but I feel a connection to her that is surprising to me. Her warmth and friendliness transcend time as far as I'm concerned. Everyone who speaks of her loved Rene Bond. I love her, too. Happy birthday, angel.