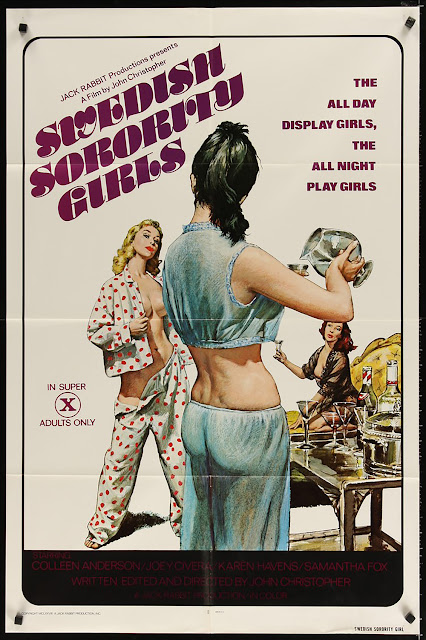 John Christopher's SWEDISH SORORITY GIRLS (1978) is a movie I've been thinking about picking up for a long time. It has a cast of people I like, and the DVD was usually pretty cheap. Since I got a refund on something recently, I took the opportunity to add the film to my collection. I'm very pleased with the results!

And you know what? That's perfectly fine. SWEDISH SORORITY GIRLS at least doesn't overstay its welcome with excessive padding, despite IMDB incorrectly insisting it runs a full 90 minutes. It also has a sense of humor about itself, which is always welcome. The funniest part is undoubtedly the fake Swedish accents affected by most of the main cast members. Those alone are worth the price of admission.

I can't exactly recommend SWEDISH SORORITY GIRLS since there's just not a whole lot there. However, I enjoyed it despite dragging my feet for a long time about seeing it. If it looks like your cup of tea, and it's cheap, I say give it a shot.


But wait, there's so much more! 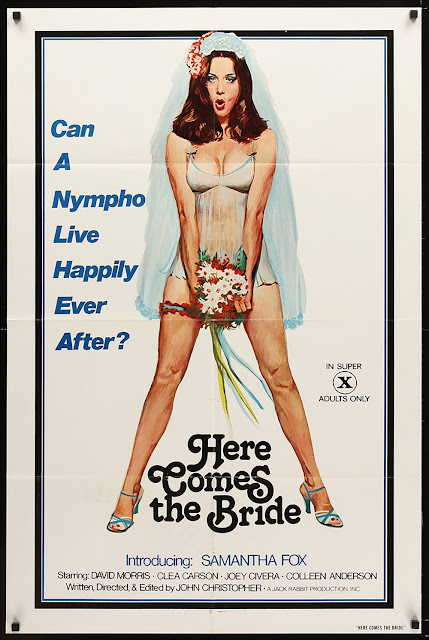 I remember considering HERE COMES THE BRIDE the lesser of the two films on this particular Peekarama disc compared to PUSSYCAT RANCH, but I enjoyed it more on its own merits this time. Star Samantha Fox is great as the unrepentantly horny but transparently full of shit bride, while David Morris is equally amusing as her amazingly clueless blockhead of a paramour. It's not particularly challenging as a movie, but it has some decent laughs and delivers on what you are hoping to see, too. After I finished this rewatch, I had a lot more respect for it because I realized something about it that was not obvious on my first viewing.

Every shred of visual evidence points to the conclusion that SWEDISH SORORITY GIRLS and HERE COMES THE BRIDE were shot simultaneously. It was probably done over a long winter weekend considering all the snow on the ground (more on this too) in both films. It's one thing to hear stories about filmmakers shooting two movies at the same time. It's almost breathtaking to see it play out in front of your eyes so obviously when you just put the clues together.

Since it is the easier of the two films to see, I'm going to focus on HERE COMES THE BRIDE as far as pointing out the connections between these movies. But don't worry, SWEDISH SORORITY GIRLS will get more than a fair shake. Screencaps from SWEDISH SORORITY GIRLS are courtesy of my pal Jimmy, and you should go check out his blog, too. Screencaps from HERE COMES THE BRIDE are from the Vinegar Syndrome product page. 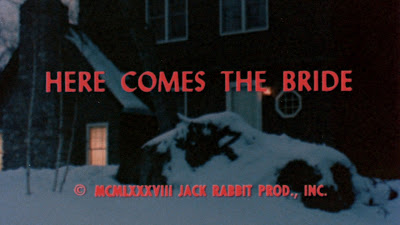 HERE COMES THE BRIDE main title
HERE COMES THE BRIDE opens with an exterior shot of the home of Tom (David Morris) and Rhonda (Samantha Fox). Already we have our first connection to SWEDISH SORORITY GIRLS because this same structure also plays a prominent part in SWEDISH SORORITY GIRLS. In that film, it is depicted as the "sorority house" where Ingrid (Colleen Anderson) lives. 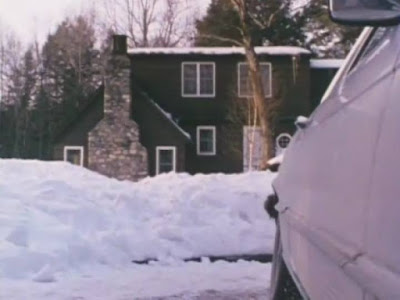 SWEDISH SORORITY GIRLS sorority house
I call this a structure rather than a house because I don't think it's a house. Based on its location and its apparent proximity to ski slopes (as seen in SWEDISH SORORITY GIRLS), I believe this is a ski lodge. I further believe most, if not all, of the interior shots in the film occur within its walls no matter where the storyline says these events are occurring. 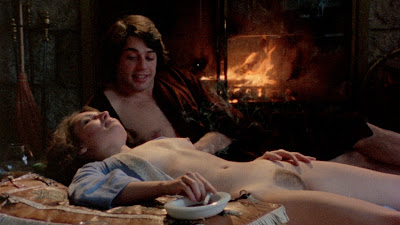 HERE COMES THE BRIDE - in front of the fireplace
The narrative proper opens with Tom and Rhonda making love in front of their fireplace. Their reminiscing about their courtship and marriage afterward is the basis of the story. The living room is dark, but you can see enough to make out pertinent details.

Back to HERE COMES THE BRIDE as Rhonda recalls her first meeting with Tom in front of her apartment building when he was shoveling snow and helped her up when she fell. She invites him into her apartment, but he leaves before having the hot chocolate she promised. Just as well, because two studs (Roger Caine and David Christopher) arrive to service her.

The apartment exteriors in BRIDE appear to be unique to that film. However, my guess is Rhonda's apartment interior is part of the ski lodge. Only the kitchen is shown, but since there are no scenes in the kitchen in SORORITY GIRLS, I can't be sure.

Tom and Rhonda next remember a double date at the drive-in with Jim (Richard Stevens) and Vicky (Erica Havens) who were going at it in the back seat. When Rhonda goes to the ladies room, she makes a pit stop in the car of a solo patron played by Joey Silvera.

During her backseat tryst in HERE COMES THE BRIDE, Erica Havens wears the same black coat seen through much of SWEDISH SORORITY GIRLS. 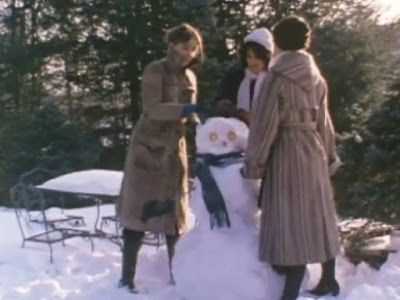 SWEDISH SORORITY GIRLS - Erica Havens is in the center
Next, it's time for the "bridal shower" which started this whole thing in the first place. 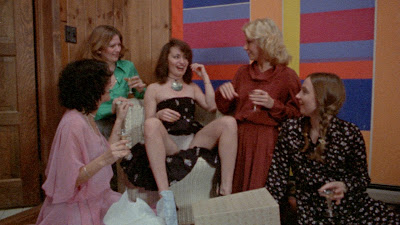 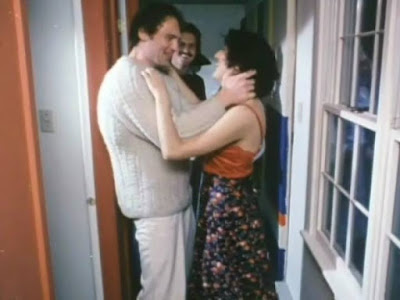 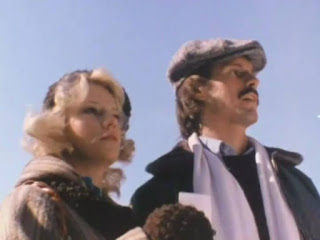 SWEDISH SORORITY GIRLS - Colleen Anderson as Ingrid and Joey Silvera as Sven (ya!)
Anyway, after the bridal shower, it's time for the wedding! Well, after a pre-wedding interlude between Rhonda and Jenny (Clea Carson), that is. And though the movie shows a church steeple, Tom and Rhonda and their guests are all shown outside the ski lodge. Presumably, they are on a deck. We cut to an airport with an airplane landing to convey the honeymoon. Christopher included footage from this particular airport shoot in both HERE COMES THE BRIDE and SWEDISH SORORITY GIRLS, but I don't think the movies use the same shots.

It's when we get to the honeymoon suite when the connection between these two films becomes especially strong again. 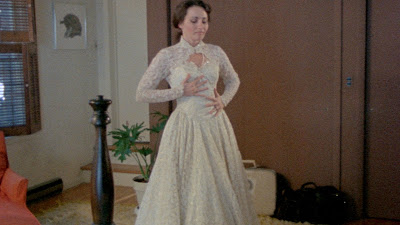 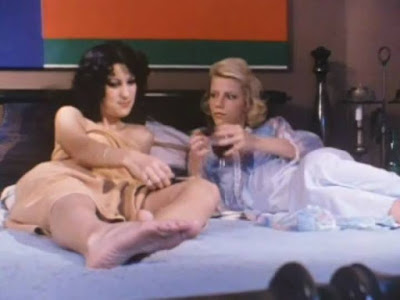 I would be unsurprised to learn this particular ski lodge appears in other productions. It seems like a versatile place to film in its use in HERE COMES THE BRIDE and SWEDISH SORORITY GIRLS. Given the significant overlap in both cast and crew (these credits are identical between the two) for both movies in addition to their common location, I have little doubt they were shot at the same time. Which means John Christopher threw together two reasonably professional-looking flicks in probably no more than three days. That's pretty impressive.