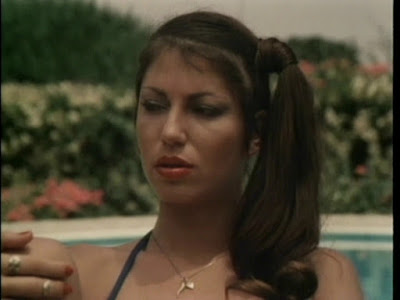 Starr's her name, and starring is her dream. This raven-haired beauty has been a show-business professional for nearly five years, and when this lady works, she really cooks. She's hot now, and she knows it. As a singer, dancer, stripper and an actress in ten feature films, Starr's achieved a reputation of throwing her whole being into every assignment.

-- from the pictorial "Starr Material" in Hustler (September 1979)

Starr Wood is one of those adult film performers who fascinate me.  She was never a big star, and was never promoted as a big star as far as I'm aware beyond the copy reproduced above from the pages of Hustler.  However, she was active as a supporting player for at least 6 years under a variety of names.  Given the fact that she wasn't incredibly prolific during that period, we can safely assume she was doing other things and the movies just supplemented her income.

Email ThisBlogThis!Share to TwitterShare to FacebookShare to Pinterest
Labels: your online secret